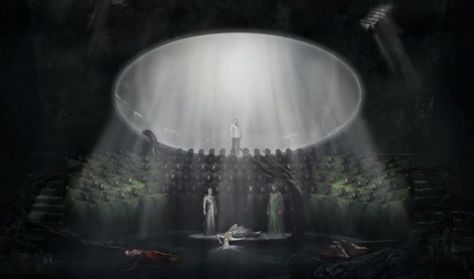 The Wagner production for this Met HD season is a new Lohengrin conducted by chief music director Yannick Nézet-Séguin and staged by the well-known French-Canadian filmmaker François Girard.

The Wagner production for this Met HD season is a new Lohengrin conducted by chief music director Yannick Nézet-Séguin and staged by the well-known French-Canadian filmmaker François Girard. Returning to the New York Opera House stage after a 17-year hiatus, the Romantic opera of the swan knight features Piotr Beczała in the title role, of which he is one of the most dedicated portrayers active today, with American soprano Tamara Wilson taking the stage as Elsa of Brabant.

"No sooner had I stepped into the noonday bath than I was seized by such desire to write Lohengrin that, incapable of lingering in the bath for the prescribed hour, I leapt out after only a few minutes, scarcely took the time to clothe myself again properly, and ran like a madman to my quarters to put what was obsessing me on paper." If we can believe Wagner's recollection, it was at his spa treatment in Marienbad in 1845 that, "Lohengrin stood suddenly revealed before [him] in full armor." However it happened, ever since then, or more precisely, ever since the 1850 world première conducted by Franz Liszt, the heroic knight has stood before the world's opera audiences with uninterrupted steadfastness, and with more than six hundred performances there, Lohengrin remains Wagner's most popular opera at the Met. Returns to the repertoire in a new production, the performance promises a range of Wagner specialists: Christine Goerke, who has won acclaim as Brünnhilde in the HD broadcast series, along with Russian bass-baritone Evgeny Nikitin emanating power as Telramund, who has lost both his will and his honour.

The 'Metropolitan Opera Live in HD' transmissions have been made possible through the cooperation of our partner, liveincinema.eu s.r.o.

Throughout the history of classical music, certain works have been created that require an enormous number of performers and a…