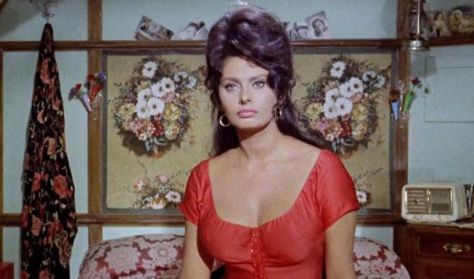 The bittersweet life. This omnibus film - AKA anthology film - has a 25% Fellini quotient. In the title of the movie, Boccaccio refers to the archness of the stories. The '70, on the other hand, is what the creators believed to be the earliest date they would be allowed to release their bold film.  more

What makes the opening piece in the Müpacinema Fellini series so incredibly thrilling is the way the four artists (because we also have Mario Monicelli, Luchino Visconti and Vittorio De Sica) effortlessly present us with life in Italy at the start of the 1960s.

This period was a defining period in the life of the Italian people. An economic boom, the Olympic Games, the reconstruction of the nation's identity... Each of which left its mark on traditional values, the family, interpersonal relationships and morality. The inhabitants of the new world find themselves trapped by the media, advertising, the burden of performance and fashion. Not to mention sex. That's not to say the Italians had previously followed every commandment - including the notorious sixth - to the letter. In this new era, however, nudity became public and the adultery hitherto tactfully hidden grew increasingly visible. The episode directed by Fellini - The Temptation of Dr Antonio - clearly references the temptation of the hermit St. Anthony by demons, included Luxuria, the temptation of lust. This time, the demons enact their vile duties through the form of a huge milk advertisement, with Anita Ekberg, the milky blonde of the poster, showing off the bodily riches already displayed in La Dolce Vita. The question is, will our hero be able to confront this overwhelming force and ensure the world around him is not plunged into a state of moral panic when confronted by her devilish hips and heaving bosoms? Doctor Antonio's visions, on the other hand, would rival the paintings of Hieronymus Bosch.

Throughout the history of classical music, certain works have been created that require an enormous number of performers and a large resonant space for their sound to be heard properly. Before Müpa Budapest opened its doors, Hungary had no venue worthy of presenting pieces like this.

One of the many factors that make the organ so great is, apart from the huge repertoire of mainly Baroque,…

The heroic King Miklós Kis falls head over heels in love with the most beautiful girl in the world, Tercia…