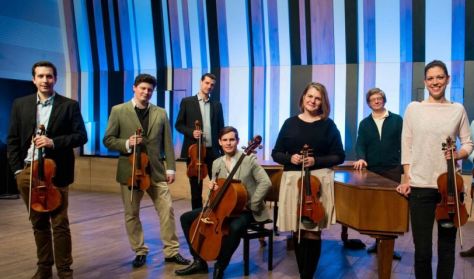 Sixty-year-old Miklós Spányi is one of the most significant Hungarian figures in the historically informed performance of early music: a harpsichordist and organist, he also works as a musicologist, teacher, conductor, and a specialist in the works of C. P. E.  more

Vivaldi: Concerto for Two Oboes and Orchestra in A minor, RV 536

Sixty-year-old Miklós Spányi is one of the most significant Hungarian figures in the historically informed performance of early music: a harpsichordist and organist, he also works as a musicologist, teacher, conductor, and a specialist in the works of C. P. E. Bach. His ensemble, Concerto Armonico, has been playing for nearly four decades. Their concert will be an amazing adventure across masterpieces of Italian Baroque music and, more specifically, the concertos of that era, with a focus on the genre of the oboe concerto in particular. The guest soloist for the evening will be Emanuel Abbühl, a former student of the outstanding Swiss oboist Heinz Holliger.

Unity and variety: these words could serve as the motto of the concert, because even though we will be exclusively hearing music by Italian composers, the list of their names is still a highly diverse one: Geminiani, Alessandro Marcello, Corelli, Albinoni, Vivaldi - all of them are representatives of the Italian Baroque and all of them were part of the development and flourishing of the concerto genre. Although they all represent the same era, they did not all belong to the same age group: Corelli was the oldest, followed by Albinoni, Marcello and Vivaldi, with the youngest being Geminiani. Each composer had his own stylistic shading. Standing out among them is Vivaldi, whose oeuvre contributes the most works to the concert programme. The fact that we will get to hear several oboe concertos this evening, and even one for two oboes, makes it an exceptional occasion, as, for the most part, the Baroque oboe is employed as a chamber orchestra part to enriches the range of colours in historically informed performances of early music. The guest soloist for the evening, Emanuel Abbühl, is a member of world-famous orchestras and a sought-after soloist and teacher who has held numerous master classes. His partner in the two-oboe concerto will be his former student Seung Eun Lee, who first studied in her native South Korea before moving on to Zurich, Rotterdam, Geneva and, finally, Frankfurt. She performs on both modern and period instruments.