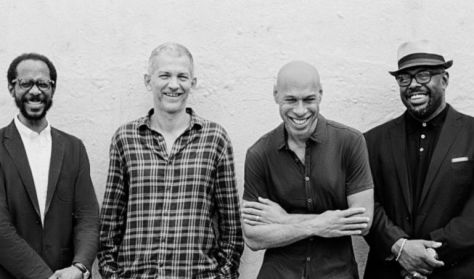 At the start of the 1990s, four superb musicians burst on to the post-bop jazz scene. Today, each of them has become one of the most highly esteemed performers of his chosen instrument. Together, they made their name as the Joshua Redman Quartet with the 1994 album MoodSwing.  more

In addition to Redman, the now-classic record also featured pianist Brad Mehldau, bassist Christian McBride and drummer Brian Blade. Though they have all performed on the Müpa Budapest stage separately, this is the first time we will have the chance to hear the four musicans play in Hungary together in their legendary line-up.

In fact, it's been a while since anyone else has seen them perform live. The others have all featured on several of Redman's later records - including three of the four together. However, after the influential 1994 album, they didn't perform as the classic quartet until the 2020 album RoundAgain. Now they will take the record to shake things up on the Müpa Budapest stage. On his second album (Wish, 1993), Joshua Redman - son of the legendary free jazz saxophonist Dewey Redman - enjoyed the support of greats such as Pat Metheny and Charlie Haden, though his true breakthrough came with his own quartet the following year. The MoodSwings album was not only a huge success, it helped turn each individual musician into one of the greats of the genre. With his unique pop covers, Brad Mehldau has also become a significant crossover artist, Christian McBride has played with virtually all of the most celebrated musicians in jazz, and Brian Blade has also partnered with a wide array of world-class performers. Which is why the superb new album once again recorded as a quartet in 2020 made such an impact, with listeners amazed by the incredible harmony of the four musicians. A unique experience awaits us at Müpa Budapest.

Song and aria recital in two parts, with Hungarian and English surtitles

There will be a few lesser-known songs to complement the old classics, all perfomed by the vocal duo of Dóri…