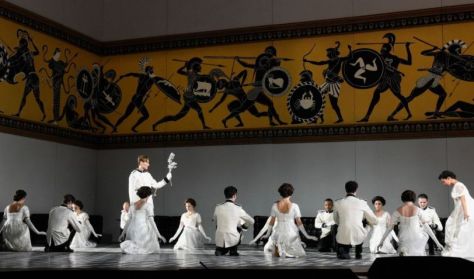 Robert Carsen's production of Der Rosenkavalier, which was first staged in New York in 2017 and broadcast as part of the HD programme at the same time, has become one of the most memorable opera productions of recent years.

Robert Carsen's production of Der Rosenkavalier, which was first staged in New York in 2017 and broadcast as part of the HD programme at the same time, has become one of the most memorable opera productions of recent years. Its return now promises new leads, as taking the stage as the Marschallin will be the Norwegian soprano Lise Davidsen and her huge voice, while the trouser role of Octavian will go to American mezzo-soprano Isabel Leonard, familiar from her portrayal of the title character of Marnie as well as other appearances..

Transplanted to the closing years of the reign of Franz Josef, the plot unfolds between grand displays of stylistically authentic furniture and very cleverly done copies of paintings to arrive at the third act set in a luxury brothel that perhaps even the most discerning aristocrats of the time could never have dreamed of. Such is the world of Robert Carsen's Rosenkavalier, whose elegant grandeur is probably only comparable to the elite team of opera singers featured in it. "Die Zeit, die ist ein sonderbar Ding": time is a strange thing. Thus sings the Marschallin in her monologue recognising the horror of the passage of time, and barely six years after our previous Rosenkavalier experience from New York, the international HD broadcast audience will be able to feel the truth of this sentence too. This is because of the leads from that time, Renée Fleming and Elīna Garanča have since bid farewell to the roles of the Marschallin and Octavian, respectively, although the Austrian bass Günther Groissböck will return with elementary force to play Baron Ochs as an amiable ox, as will the American soprano Erin Morley with her so authentic portrayal of the delicate figure of Sophie, in this performance conducted by Simone Young.

The 'Metropolitan Opera Live in HD' transmissions have been made possible through the cooperation of our partner, liveincinema.eu s.r.o.

Club festival of the East