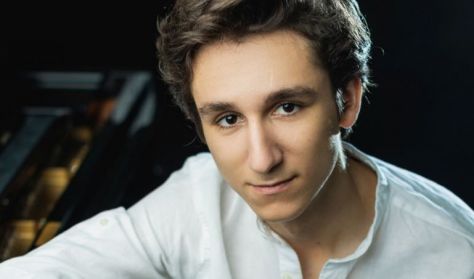 It is always an exciting experience to listen to a new work by a Hungarian composer. At this concert in the Discoveries series, the MÁV Symphony Orchestra, playing under the baton of Róbert Farkas, will introduce the audience to Tímea Dragony's Onyx.  more

The programme has another discovery in store for us as well, as Prokofiev's late composition for cello and orchestra, his Sinfonia concertante, is a neglected treasure. And for many listeners, of course, the playing of cellist Bence Temesvári, the soloist for this work, and/or pianist Valentin Magyar, who will take the lead in Grieg's Piano Concerto in A minor, will also offer the experience of a pleasant first encounter.

Tímea Dragony was born in Nyíregyháza and gained her first musical experience there as a member of the Cantemus family of choirs. She later went on to study at the Zoltán Kodály High School of Music in Debrecen and Budapest's Liszt Academy under György Orbán. Her works have been performed for audiences in Budapest and several other European cities: Dresden, Leipzig, Frankfurt, Amsterdam and Madrid. This concert will feature the world première of her composition for symphonic orchestra Onyx. Valentin Magyar studies at the Liszt Acadamy under Attila Némethy, Balázs Szokolay and Kálmán Dráfi. He has competed successfully in several international competitions. Bence Temesvári is studying at the University of Music and Performing Arts Vienna under Péter Somodari, István Várdai and Reinhard Latzko. In recent years, he has placed well in several competitions both in Hungary and abroad. Since 2022, he has served as principal cello with the Vienna Symphony Orchestra. Founded in 1945, the MÁV Symphony Orchestra plays an important role in Hungarian musical life. Artistic director Róbert Farkas has led the ensemble since 2021. The 40-year-old conductor began his studies here at home in Hungary before completing them in Germany, where he also launched his international career.