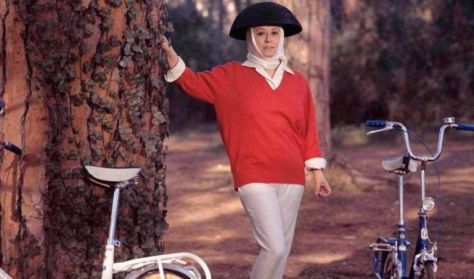 Juliet of the Spirits is a hotly debated Fellini film. (One of many.) Some saw it as the story of a betrayed women, others as the dramatic tale of a lonely figure. There have been and are many who in this film seek and find evidence of Fellini's spirituality.  more

The effect of the conflict in the private lives of Fellini and Giulietta Masina is also tangible. The film's reception was also conflicted: it was a failure in Europe, a smash hit in America. Now, in 2021, we have the opportunity to project new meanings onto it.

Interpreting Juliet of the Spirits is made more complicated by the fact that this is Fellini's first feature film in colour. A colour film brings a totally different language to one constructed from many shades of grey. Especially if much of the story is contained within dreams, memories and visions. The characters wear wild, extreme and surreal costumes - not to mention the orgy of hats. One particularly intriguing aspect is how Fellini's peculiar, spectacularly colourful 'still life' is inserted into the story: flowers, bowls of fruit and the stringing of chilli peppers. We should hastily point out that by this point, colour films were no longer considered a technical innovation. (The first full-length colour film in Hollywood was made in 1938, the first in Hungary the 1950 Ludas Matyi.) Yet making impressions of reality in colour cannot be compared to a film where the colours themselves create layers of meaning. The costumes of 'Juliet of the spirits' become more exciting and tense when contrasted with the clothes of the figures that surround her. Because in their own ways, these characters each try to shepherd the lady - paralysed by/resigned to her loneliness - down their own path. So it makes no sense to ask that thoughtless question: what is this film about? It depends on how you approach it and from what direction. So, over to you!