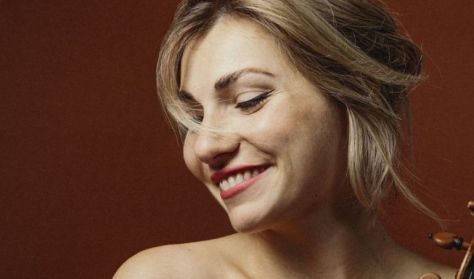 Simferopol is a city on the Crimean peninsula in Ukraine. This is where Diana Tishchenko, one of the most outstandingly talented string players of recent years, was born in 1990, and now she is bringing her violin to Müpa Budapest as part of the European Concert Hall Organisation's (ECHO) annual Rising Stars series showcasing young musicians.  more

It is a special source of pleasure for Hungarian music listeners that this virtuosic and evocative artist will be partnering with the pianist Zoltán Fejérvári, a countryman of ours with whom she has already made a joint album composed of works by Ravel, Enescu, Ysaÿe and Prokofiev.

It is a common fate for many musicians born in Eastern Europe to study in the West and later pursue their careers there. After training in Kiev, Diana Tishchenko played with the Gustav Mahler Youth Orchestra from the age of 18 and at 20 was appointed concertmaster for the same ensemble under Colin Davis, Franz Welser-Möst, Herbert Blomstedt, Antonio Pappano and Daniele Gatti. She earned her degree from the Hanns Eisler School of Music Berlin, but also studied at the University of Music and Performing Arts Graz. Among her key teachers, along with Steven Isserlis and Saschko Gawriloff, we can also find Hungarian names: Ferenc Rados, Rita Wagner and András Schiff each exerted an important influence on her artistic development. Since making her debut in Berlin in 2014, she has gone on to perform regularly with renowned symphony orchestras from Europe and Asia. In 2018, her career received a major boost from her victory at the Long-Thibaud-Crespin International Music Competition. As an artist participating in the Rising Stars series, at Müpa Budapest she will perform a work by each Beethoven, Bartók and Schnittke, and, as a Hungarian première, she will present a new work by the Portuguese contemporary composer Vasco Mendonça.

Schnittke: A Paganini - for solo violin
Vasco Mendonça: A Box of Darkness with a Bird in Its Heart (commissioned by ECHO) - Hungarian première
Beethoven: Violin Sonata No. 3 in E-flat major, Op. 12, No. 3
Bartók: Rhapsody No. 2, Sz. 89, BB 96

MUS-E - Music from here and beyond Szép

Il signor Bruschino, ossia Il figlio per azzardo based on the opera by Gioacchino Rossini Szép

The two youths, Sofia and Florville, are in love. Their only desire is to finally be married. However, the girl's…

Song and aria recital in two parts, with Hungarian and English surtitles