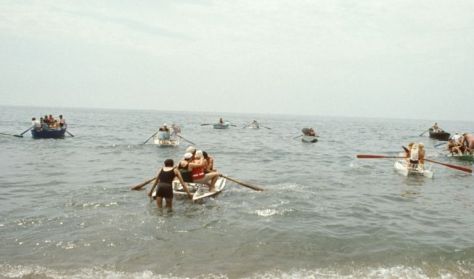 The meaning of the title of the film: I remember. Of course, it doesn't follow that you have to believe Federico Fellini.  more

Let's set things straight: though Fellini often uses various parts of his own life, if you take a quick look at his story of his life you will soon realise that - as expected - it is constructed from fragments, anecdotes and legends. In other words, the character of Titta does not directly represent the director - though they do have some shared memories. On this occasion, the screenwriters - Tonino Guerra and Fellini - tell the story in a style akin to that of Bohumil Hrabal's Uncle Pepin. There are even narrators...

For Fellini fans, Amarcord is a must. Essential. And, for once, the director places the film into the framework of a loosely edited story. Amarcord is the story of a year - from poplar seeds to poplar seeds, and from a winter's pagan ceremony to a wedding. Life and death in the life of a small town. Sometimes happy, sometimes sad. The characters, however, are incredibly strong. And, once again, we can see that with Fellini, casting is key. And they are not thinking merely of epic womanly curves. Extreme physical characteristics are a recurring theme in his films. Fat people and thin people, giants and dwarves. Beauty does, though, make an appearance in most of his films. Not necessarily conventional beauty, or even that of the fashion of the times. Instead, it is far more often the beauty in the eye of the observers in the story and the audience displayed on the screen. (There are also times when Fellini will use a true beauty, though this is likely to be beauty that represents purity and a sphere above and beyond bodily functions.) It is also worth noting how he uses physical imperfections (warts, freckles, scars, etc.) to help define the characters in his films. There is no question that Fellini's films have inspired many directors. It is easy, for example, to see the influence of Amarcord in the films of Giuseppe Tornatore.

Though Tony Lakatos has lived in Germany since 1981, he has always come to play in Hungary as if he were arriving home. He has most frequently returned as a special guest performer, so it is about time that he finally brought us his own group and album: Blue Chili, packed full with captivating songs.

Ferenc "Fegya” Jávori founded the Budapest Klezma Band more than 30 years ago. The group performs Fegya's compositions and arrangements and has helped to popularise the traditional Jewish music of Central and Eastern Europe. This show will take the audience on a genuine musical journey.

Although Wagner's mature masterpiece, which he wrote after Tristan but before completing the Ring, is officially a comic opera and…

Venetian trumpet. The title speaks for itself: a concert in which we hear Italian music from the 18th century throughout,…